Have quite a bit to catch-up on as computers have been a bit harder to get on and wifi speeds have been super slow.  We made it to Laos in a record 24 hour bus ride.  It could have been a bit faster but going across the border also included a nice trek from the Vietnam border station to the Laos border station.  Also, we had a three hour stop to pick up about sixteen locals to squeeze into the already “full” bus.  Once we made it to the bus station we hooked up with some others to make a fun Tuk Tuk ride into the city center of Vientiane.  Vientiane is the capital but it is pretty quiet and almost seemed like a small town.  The currency here is called the Kip and rates about 7,700 to 1 US dollar.  Sort of throws you off after you have been dealing with such bigger numbers in Vietnam.  That night Taner, Janett (a German couple), Megan, and I got to enjoy some scrumptious crickets and larva with some Beer Lao.  If there wasn’t any seasoning they just would have been crunchy and tasteless.  The larva in specific were just like paper. 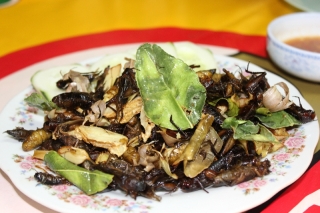 The next day we rented some bikes and cruised around town with Taner and Janett taking in the sights.  It really only takes a day to do that, but is really enjoyable as it is pretty easy to get around with traffic being so much less than Vietnam. We stopped at the Patuxi which is a large tower structure made from concrete that the US donated to Laos to build a new airport runway. While we stopped there a large school group showed up and about every student had a survey for us to fill out. It was nuts! I didn’t think we would ever escape them. We had to b.s. our way through nearly all of it, hope they got a good data pool! Vientiane has a really nice and lively night market as we enjoyed some scrumptious grilled sausages and other balled meats that I couldn’t figure out what they were.  Probably pork mixed with something else. 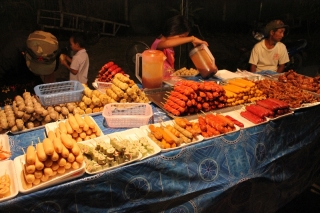 Back on the bus again.  This time it was only a few hours, but for Megan it might as well been twenty-four hours.  This bus ride was really fast through constant forty-five degree turns.  About half way through Megan was getting motion sick.  I felt pretty bad for her as I was just mad because I couldn’t read or watch the tablet with the constant hard turns and bumpy road throwing us around.   Luckily we made it to Vang Vieng stomachs intact.  Vang Vieng was known for it’s river tubing and copious amounts of bars lining the river.  Here recently they closed nearly all the bars down on the river as about once a month someone would die tubing.  Megan and I actually found it most relaxing  and quite enjoyable. Not that I couldn’t enjoy a few cold ones while drifting a little over 4km in about 3.5 hours, but the absence of blaring beats and hundreds of inebriated backpackers was ok. Just recently before the river bar restrictions were put in place, they were averaging 800 tubers a day. We heard they are now averaging only 100 tubers a day. In the evenings we hung out at some restaurants that continuously play either Friends or Family Guy non-stop.  It was hard to leave as the fresh fruit shakes are so amazing. The next day we rented some mountain bikes and cruised out through local villages to check out some caves.  The first one wasn’t too impressive but the second one was pretty awesome.  It took us a better part of an hour to circle through just the main cavern.  Outside the cave there was a real nice “blue lagoon” with clear, cool water.  It was nice to take a dip in it after the workout of riding the bikes out there.  To bad there wasn’t an identical lagoon back in Vang Vieng. 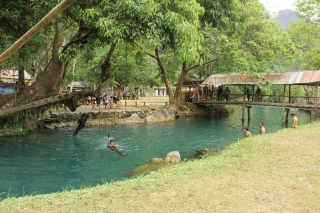 After two and a half days in Vang Vieng we hit the road again on a six hour minibus ride to Luang Prabang.  I think I much prefer a minibus to a full bus,  but it looks like Laos has a bunch of road work to do up north.  Some of the pot holes could have been mistaken for ponds, or maybe our driver just took a more scenic route???  We were a bit worried when arriving in Luang Prabang because it is the beginning of their New Year so we didn’t know if we could find accommodations.  Fortunately we did, but prices are pretty high.  Either way Megan and I are enjoying the festivities.  The New Year lasts for three days, but here they sometimes extend it out for a week or better.  During the holiday the entire city, or country for that matter, turns into a massive water fight.  Everywhere you go people are squirting you with water guns or literally throwing buckets of water on you.  It doesn’t matter who you are, but they will stop if you have something that can be broken like a camera but one doesn’t take that chance.  Just taking a Tuk Tuk from the bus stop to city center we had a few buckets of water chucked our way.  To say the least we were soaked before finding a hotel.  Tomorrow is suppose to be a big street party, the next day is some pageant, and the following day another party.  Woot!  I think they have the US beat on a good New Years celebration. 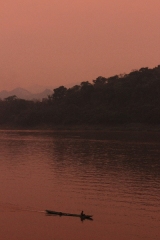 We have found that the Laos people are much nicer and considerate in general than the Vietnamese.  It may be because tourism hasn’t hit Laos as hard yet. It also appears there may be more of a middle class, but that might be because we are seeing more cars and less motorbikes. All in all we just enjoy all the smiles and hellos we have been getting.

Megan and I are heading farther north after this and then back to the Southern portion of Laos.  More than likely we wont really have any internet for some time so it might be a bit until the next post.  I should have all the pictures since we left Vietnam up in the next 24 hours. Enjoy!