As the distances between our destinations are spread farther apart and the end of our trip creeping nearer, our time is increasingly spent on buses and less time is spent getting to know the culture, people, and feel of a place.  South America has so many phenomenal sites, natural and historical, that we sadly don’t have time for much else.  It’s not really a choice though, not when you have the opportunity to see some of the biggest, best, most extreme, and most beautiful places in the world.

In Northern Chili we headed straight for the Atacama Desert, the driest desert in the world full of salt flats, salt mountains, geysers, hot springs, flamingos, adobe constructions, and terrain so similar to the moon’s that one of the mars rovers was tested here.  We based ourselves in the secluded town of San Pedro de Atacama, not a bad little town for being in the middle of the driest place on earth.  Basically the entire town is made of adobe construction and they continue to use this method for most everything.  That’s good because dirt is the only thing they have!  I do wonder what they do with trash though, because a landfill in that climate would just be a mass of well-preserved trash. 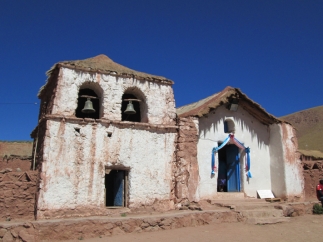 (An old church made of adobe)

From San Pedro de Atacama, some of the top sites are within biking distance, but most are too far away or too dangerous in that type of climate to attempt on our own, so we ended up taking a couple of tours.  The first tour was to El Tatio, the site of the third largest geyser field in the world, in a flat basin surrounded by barren mountains.  The best time to see the geysers is at sunrise so we dressed for a cool desert morning and quickly realized that wasn’t adequate.  It turns out the geysers are at a numbing 14,173 feet above sea level.  The sight of dozens of towers of steam rising all around us, near and far, was pretty cool.  However, when we saw the geysers up close, we were a little disappointed.  If you’ve ever been to Yellowstone National Park in Wyoming, you’ll understand.  What we didn’t realize is that the El Tatio geysers are much, much younger than those in Yellowstone so they are not nearly as big or developed.  Also, the mineral content isn’t as rich so the El Tatio geysers don’t have all the brilliant colors that we had seen in Yellowstone.  One nice bonus was that these were not blocked off by railings, so we were able to stand within touching distance of most geysers.  Nearby was an area of somewhat older geysers that were a bit more similar to those in Yellowstone.  A thermal pool was built around one geyser and I had to try it out.  It felt warm to my numb limbs at first but not for long.  The only really warm spot was the little cove where the geyser spilled in.  It was comical seeing everyone huddled together in a corner of the large pool! 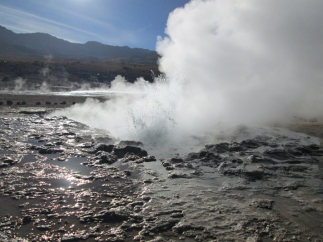 (A geyser in El Tatio)

Our second tour was to the Salar de Atacama (Atacama Salt Lake).  It began with a stop at a tiny oasis town with an old bell tower, now a National Monument.  The interesting thing about it is that cacti “wood” was used to make the doors (the roof of the old church in San Pedro is also cacti).  Visiting the Chaxa Lagoon National Reserve within the Atacama Salt Lake was the highlight of the day.  The salt lake, formed from evaporation of an underground water system with a heavy saline load, is the third largest in the world.  The crust, which is up to 70 centimeters thick in some places, is extremely interesting to look at closely because the crystallization forms “flowers” with all sorts of shapes and textures.  Really crazy!  Somehow the beautiful Chaxa lagoon managed to form on the surface and is favored by three types of flamingos.  We found out that the pink flamingos we’ve seen in zoos are artificially colored because they can’t eat the same food as in the wild, which here meant a type of tiny shrimp so small we could barely see them.  On this tour we also visited a couple turquoise lagoons formed by the eruption of a volcano long ago.  The lagoons have no outlet and are fed only by rain and snowmelt.  From our distant viewpoint we could make out mounds of dirt and plants in the water made by birds for nests, presumably a tactic to fend off land predators. 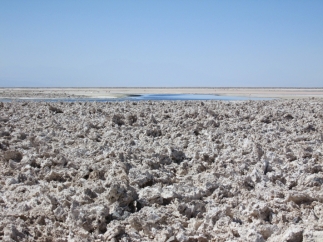 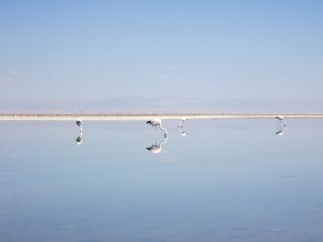 Our last Atacama trip was to Valle de la Luna (Moon Valley) with an impressive array of colors and textures.  We rented mountain bikes and made our own tour.  Biking and hiking through a desert so dry, hot, and at high altitude was a new experience, but we survived and it was so cool!  The first trail we walked was through a fun cave system which appeared to be carved from wind and water out of almost pure salt.  I know; I tasted it!  There were many drastically varying and really interesting formations that I don’t know how to describe, so you’ll just have to see the pictures.  This is the area where the Moon Rover was tested! 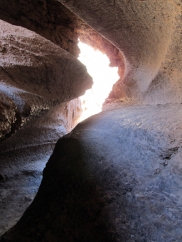 (A salt cave in Moon Valley.  See the glistening walls) 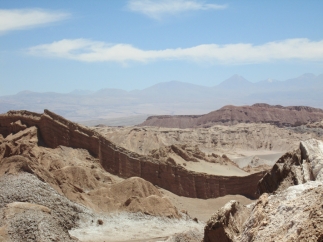 (The extremely varying landscape from a high viewpoint in Moon Valley)

We had seen a couple blogs online that raved about the drive between San Pedro de Atacama in Chile and Salta in Argentina, so we opted for a daytime bus and managed to stay awake for the long ride.  We transitioned from the gently rolling, desert hills West of San Pedro to rugged desert with the most enormous cacti I’ve ever seen; to a crusty, cracked salt flat; through more hills and incredible cacti; and lastly through some of the most colorful hills we have ever seen.  These last hills were decorated with linear strips quite possibly containing every color in the rainbow.  Of course our pictures through the bus window don’t do a great job of portraying them, but Argentinians are so proud of these beauties that we saw posters of these hills everywhere we went. 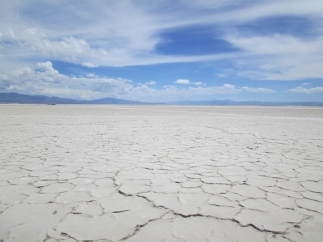 (A salt flat on the Argentina side of the border) 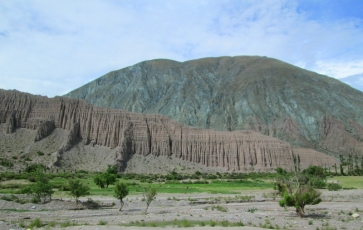 We didn’t do much of anything in Salta besides relax in a really nice hostel to recoup from our active days in the desert.  We also took much advantage of a well-stocked supermarket and kitchen.  The one notable adventure in Salta was a ride in a gondola to the top of San Bernardo Hill overlooking the city.  At the top was a nice park with fountains and greenery that gave a peaceful and romantic atmosphere.

The trip from Salta, in the Northwest of Argentina, to Puerto Iguazu, in the far Northeast, took us 24 hours, which really doesn’t seem all that bad anymore.  We had only one goal for this long haul: To see Iguazu Falls and check off another site from a “Wonders” list (specifically New7Wonders of Nature in this case).  The falls are located at the border between Argentina and Brazil and are 1.6 miles wide and are both taller and more impressive than Niagara Falls (at least Eleanor Roosevelt thought so), although Niagara has a higher rate of flow.  We haven’t seen Niagara so we can’t say from personal experience.  There are many pathways that give you several different perspectives of the incredible falls, including up close to a lower section, from an island at the bottom, midway up, over smaller falls, and most impressively right on top of the strongest section, called the Devil’s Throat.  The island was closed due to increased flow, but we were able to get really wet on the trails at a lower section and at the very top overlooking the Devil’s Throat.  At the Devil’s Throat, water is pouring in from three sides with unbelievable force, causing the mist to rise between 100 and 490 feet.  A walkway has been built stretching waaaay out above the falls to a top edge of the Devil’s Throat.  I feel for the brave people who built that trail!  It seemed about every 10-15 seconds a really big spray of mist would tackle the crowd on the platform, making for difficult photo-taking but a lot of excitement! 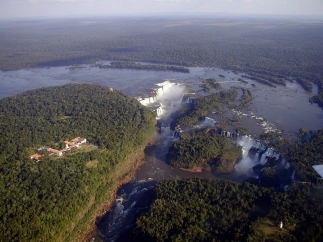 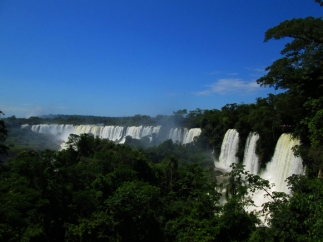 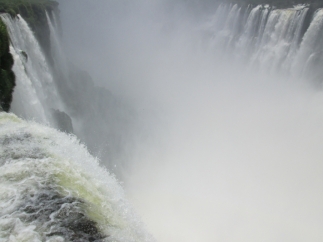 (Looking into a section of the Devil’s Throat)

That afternoon we were already on a bus headed for Buenos Aires.  Even though the transport to and from Iguazu Falls took twice as long as the amount of time we spent there, we are extremely happy we made the trip.  It was incredible!

To Buenos Aires for Christmas we went!  Before arriving we were lucky to find a local to stay with on Couchsurfing.  We were excited because we thought it would make for an interesting Christmas and we would get to see how the locals celebrate, plus we would be saving money.  When we arrived to the apartment where David was waiting for us, we got a big surprise – Merry Christmas to us!  The apartment is a very nice flat that David normally rents out to tourists but loans to Couchsurfers when he has no renters.  It was pretty much the best situation ever – David is a really cool guy and is happy to see his city from a tourist’s perspective and therefore generously gave us a tour; we got to relax and feel at home with an entire furnished apartment, a 7th floor balcony, swimming pool, gym, and in a great location; we got to meet some great people and spend Christmas Eve with David’s family outside by the pool.  That’s right, Christmas in our bathing suits!  An interesting touch is that David comes from a Jewish family originating out of Austria and has some pretty interesting roots.  We learned a lot about his great uncle who escaped the Holocaust to Bolivia and later became a successful scientist and professor in Michigan.  He gave me a couple of books written by his uncle and I’ve completed one so far; very interesting life he led!  Anyway, David’s family doesn’t really celebrate Christmas, but they do take advantage of the holiday to get together and spend with family.  We enjoyed talking with his mother who is a teacher and has led an adventurous life herself, and others we met that evening including two other travelers, David’s sister, and friends.  On our first night while touring the city with David we learned that he has just applied to the University of Michigan, so we’re hoping to see him again in the states someday!  That night he took us to a really good restaurant so we could try the big, fat steaks that Buenos Aires is famous for.  They were, umm… HUGE!  Luckily Bryan and I split one, but we still probably each ended up eating about 2 pounds of steak after David gave us a portion of his too. 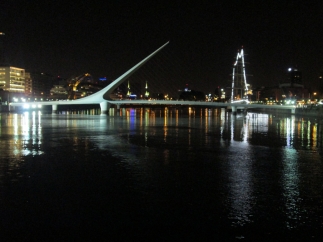 Because it was a holiday week and also because Bryan was a little under the weather, we didn’t get to experience nearly enough aspects of Buenos Aires.  We had heard tons of great things about the city and its culture, so we’ll just have to try and make it back again eventually.  What we did see, though, was really beautiful and really makes us want to go back.