In a country not so far away we start the second part of our adventure.  Colombia: a country that has so much to offer travelers, but is still trying to escape its past.

After a long flight out of Hong Kong we made it to Los Angeles for a quick break, replenished needed supplies, and enjoyed a decent hotel.  Checking in for our flight to Bogota was a bit frustrating as Spirit Airlines requires onward tickets out of Colombia for foreigners (despite that this is not required by the Colombian government).  In haste we purchased two tickets out of Bogota to Quito, Ecuador through Expedia.  This got us into the terminal where I promptly cancelled the tickets.  Gotta love the free cancellation in 24hrs!  Landing in Bogota the next afternoon, customs was a breeze.

After being quoted very inflated prices, a security guard helped us to find a reasonable taxi and got us on our way to La Candelaria.  This is the old city center that houses many Spanish Colonial and Baroque style buildings.  Bogota sits just a little over 8,600 feet above sea level, so it is quite comfortable during the day but gets chilly at night.  We weren’t ready for those temperatures.  At our hostel we immediately were given a run-down on safety: not going out at night, when it’s ok to pull out the camera, which areas to stay away from, what people to watch out for (everyone), and what real police officers look like. 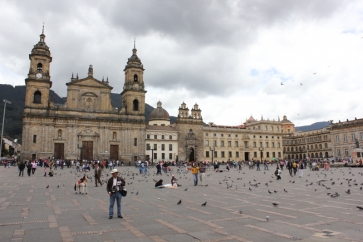 We spent a day acclimating to our surroundings, checking out the local delicacies, and enjoying the scenery.  It was nice to just walk around and observe the locals.  A considerable amount of people in the old city center are students to the copious amount of universities in the area.  We picked up a Spanish-English dictionary at a University bookstore; quite essential as there isn’t much flexibility for those who don’t speak Spanish.  We found that hot chocolate is a very common drink, especially for breakfast.  Even better, at least for Megan, is that they always offered it with either milk or water.  Hot chocolate is just the beginning, as there are European style bakeries everywhere, so every morning we had fresh baked breads and pastries.

That evening we chilled out and watched the soccer game with some Club Colombia beer.  The game was great to watch as Colombia came back from two points down to tie the game.  This meant that Colombia qualified for the World Cup.  That night we could hear the partying throughout town, which later brought out the riot police because people started tearing stuff up.  In the morning we found out people had danced on top of the bus stops and we saw white powder (no idea what) covering the streets.

Bogota has some very nice museums.  The Botero Museum, named after a Colombian artist very famous for his over sized depictions of people and objects, was quite spectacular as it showcased much of his private collection, including pieces by other artists such as Picasso, Dali, Moore, and Monet.  Botero’s artwork was definitely one of a kind!  The Museo del Oro (Gold Museum) might be one of the more impressive museums we’ve seen as it has a large collection of pre-Colombian gold work.  Pieces ranged from very basic bracelets to intricate masks, figures, and beads.  Often it seemed that the smaller the gold object, the more intricate detail was put into it. 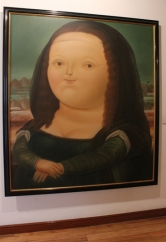 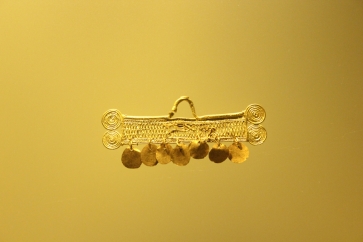 We took a bike tour one day that was led by a former journalist from California named Mike.  Mike knows a ton about Colombia and has built great relationships with many locals.  The bike tour lasted 5 hours and encompassed much more than a typical city tour might.  We began in the old city center, seeing tons of street art along the way and historically important locations such as where officials were assassinated.  Further down the road we stopped off at one of the largest markets in Bogota to try a dozen or more local fruits.  This was awesome and unbelievably good!  Dragon fruit here tastes even better than it does in S.E. Asia, and we had never before seen many of the fruits.  The avocados are ginormous!  We passed on the opportunity to try a drink that consists of a few different liqueurs, some fruit, nuts, and a live crab blended together.  Apparently it is an aphrodisiac, but no one in the group was up for finding out.  We made our way to the red light district.  Of the three areas of Bogota where prostitution is legal, this red light district is the only one where prostitutes can be visible on the street.  We didn’t linger long as the sights weren’t great. The next stop was what I was ready for: a small coffee factory where coffee is roasted and packaged to be exported, with the best beans being exported and the lower quality ones staying in Colombia.  I enjoyed a nice cup of very fresh coffee. 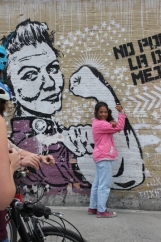 (Local girl posing in front of some street art)

We stopped by an important cemetery that contains most of the past presidents of Colombia, along with quite a few graves that are considered miraculous (like the unidentified remains of a man).  Locals visit these graves to pray when someone is sick, for example.  The variation in the quality of the presidential grave sites was interesting.  One former president’s grave was just an outline with a small plaque (he wasn’t much liked).  A highlight of the tour was when some young boys met up with us at a park and performed a rap about corruption, drugs, and violence.  Throughout the rest of the ride we observed more awesome street art with background information and stories, the old bull fighting ring, and finished it off with watching people gamble on which plastic homes guinea pigs would choose from a few meters away when let loose.  I’d hate to see what happens to an uncooperative guinea pig. 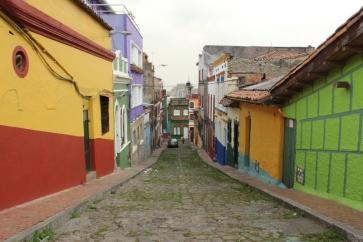 Bogota is lined on one side by mountains, including the 10,340 foot high Mt. Monserrate which is topped with a church. There are three ways up: tram, funicular, or walking.  We were told tourists should take the trail on the weekend when many locals do as you are likely to be mugged during the week.  The day we decided to go up, the trail was lined with hundreds of people making the journey up and down.  Once at the top we had a magnificent view of Bogota. 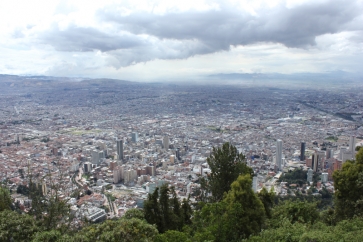 (Looking down on Bogota from Monserrate)

That evening we attended a baby shower put on by the owners of the hostel for their son and daughter-in-law.  The shower was most interesting as there were just as many men as women and even for a short while a few police dropped in just to observe.  I never found out why the police were there, but I think it had to do with having a group gathering.  Megan and I participated in all the games and were only told the rules in English if it was in the best interest of our teammates.  Luckily we could usually figure out what was going on, although one unusual game involved me hopping around on one leg for 30 minutes.  To end the night properly we stayed up with the owners’ adult children and a friend and enjoyed some drinks and salsa dancing.  This was quite the event to finish out Bogota!

The next day we headed to the bus terminal to endure a 25 hour bus ride to Cartagena, a city on the Northern coast.  The bus ride had gone pretty smooth with only one check-point, but there was one concerning thing: as we hit traffic just outside of Cartagena, I saw a group of kids run up to the bus and try to pry the luggage compartment open.  Luckily the compartment was secured and nothing came of it.

Cartagena is probably one of the most tourist areas in Colombia.  It resides on the Caribbean coast and use to be a port city used during the slave trade.  Most of the buildings are Spanish Colonial and the old city center resides within the fort walls. While we were there, Interpol was having its 82nd General Assembly. I didn’t know if this was a good thing or not, but there were police helicopters flying around the city the entire time we were there.

It seems most of our time in Cartagena was spent working out later trip details, sweating profusely, and cooking up some yummy hamburgers (another hostel with a kitchen!).  Touring the city within the fort was pretty amazing.  There were quite a few churches plotted throughout and the old architectural style of the area was impressive.  At our hostel we met a German, Martin, who we spent a lot of time with and went out for ice cream during the early evenings.  That was most enjoyable as Megan got to have dairy free ice cream (helado con agua), we enjoyed more of the city when it was much cooler out, and Martin was great company. 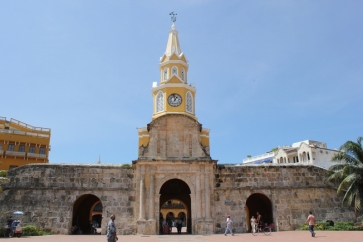 (The main entrance into the old city center/fort) 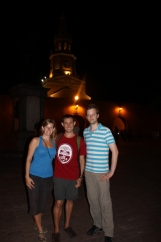 (Chilling out in the evening with Martin)

As luck would have it we scored some plane tickets to Cali that were cheaper than the 20+ hour bus ride.  Cali is a nice city and is known as the salsa capital of Colombia. Unfortunately, we didn’t do any dancing as we were only there during the early part of the week.  We did spend a full day exploring downtown.  There were some impressive buildings, especially an extravagant, Gothic style church, and the city was much less centered on tourism than Cartagena.  Megan was a bit frustrated as every time we pulled out the camera a local would immediately tell us to put it away.  Not that we couldn’t take photos, but they were concerned about us getting the camera stolen.  We didn’t get many photos because of this, but Cartagena and Bogota were much more photogenic anyway.  From Cali we took a night bus to the border and crossed into Ecuador. 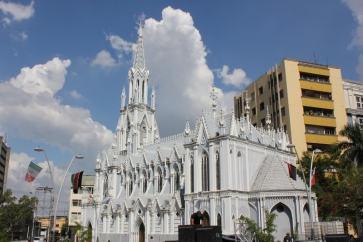 While in Colombia, we really enjoyed the food.  Besides the delicious bakeries everywhere, we could always find a nice lunch or dinner special for about $3 that came with a large bowl of hearty soup, meat (once it was horse, not bad), rice, potatoes, beans, salad, fried bananas, a fresh glass of juice, and often a dessert.  One particular combo we had (we were told was a traditional Colombian selection) came with not one, but FIVE sources of protein: sausage, chicken, beef, pork, and red beans.  Megan was sad we didn’t have the camera with us for that one. 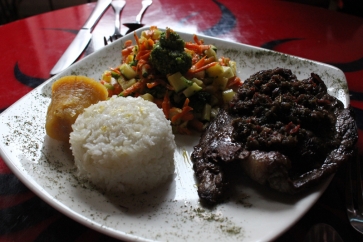 Colombia is an amazing country, and coming into it we were both a little worried about safety, but overall we felt quite safe and comfortable.  Most locals seemed to keep an eye on us, in a curious but protective way.  There were active, peaceful protests in Bogota to fight corruption and everywhere we saw people really engaged in bringing change.  Over the next few years I can only see the country becoming safer and I can’t emphasize enough how beautiful a country it is to visit.