Chilling out in Buenos Aires for a few days was great, but that was just to prep us for the forty some hours we would spend on the bus the next few days making our way to Torres del Paine, Chile.

Megan and I stopped off in Puerto Madryn for a night to break up the bus ride a little.  Puerto Madryn lies about half-way between Buenos Aires and Rio Gallegos (larger town near the very southern portion of Argentina), and is a small port town known for its whale watching.  While we were there we experienced what might be considered for some as strong winds.  Little did we know that would continue everywhere we go, even until this writing.  It was most unfortunate, as we were standing out on a rather long pier, that a large inflatable whale would go flying by on top of the water.  That was the only whale we saw. 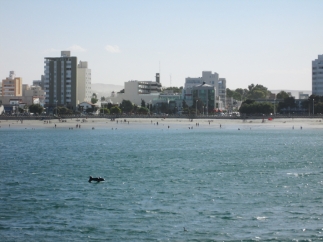 (Looking back at Puerto Madryn from the pier, and watching the whale blow away)

Back on the bus we made our way to Rio Gallegos, showing up early in the morning.  Hoping to catch a break we quickly made our way onto another bus for the border town of Rio Turbio.  If things went right we could cut several hours of bus time off from the route usually taken.  Yeah, things didn’t work out and we had to spend the night in Rio Turbio, where there is nothing and only one accommodation in town.  That night ended up being a bit rough as we had learned that Megan’s Grandpa Rhodes had passed.  I think Megan said it best in a later remark.

“…He will always be Superman in my eyes, with the strongest will to live that I have ever seen, a phenomenally cheerful attitude, and dreams bigger than himself. Since his wish to live to be 220 years old couldn’t come true (a wish he had so he would have time to accomplish all his dreams), I will try to take comfort in his support of living my own dream and promise to never let my dreams slip away.”

Sub was one of our biggest supporters of this trip and truly will be missed. 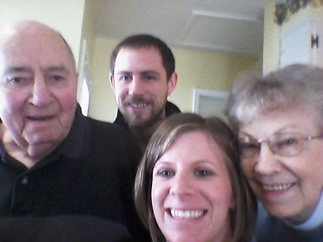 (Meg and I visiting Gpa & Gma Rhodes before the trip)

After way to many buses and four days of travel, we made it to Puerto Natales in Chili, one of the few towns that reside just outside of Torres del Paine National Park.   Puerto Natales was originally founded as a port city for the sheep industry, but now mainly focuses on the tourists that come through for the park. 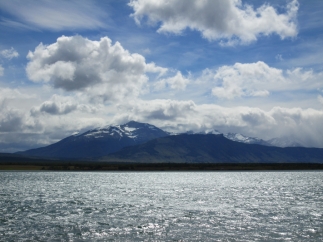 (Looking at the mountains across the sound in Puerto Natales)

Torres del Paine was one of our most anticipated destinations of South America.  It lies in a transition area between the Patagonia Steppes and subpolar forests within the Magallanes Region and Chilean Antarctica.  The park has a temperate climate of cold rain/snow with no dry season.   January is its warmest month with the temperature possibly reaching a high of 60 degrees Fahrenheit.  Cloudy and rainy are the norm during the summer.  The geology mainly consists of granite with many of the spires and peaks capped with a dark sedimentary rock that give some of the sights their amazing contrasts.

Before even finding a place to stay in Puerto Natales, Megan jumped in on a briefing covering the backpacking in the park.  Really the main thing we got from was that we can drink the water and that is to expect to get wet, muddy, and blown over by the wind.  Doesn’t sound very good, but again the weather is unpredictable.  We spent the day renting our gear and stocking up dry foods: boxed potatoes, soup, rice, pasta, granola, oatmeal, peanut butter (difficult to find), crackers, dehydrated soy meat, and tuna.  Our plan was to do the “W” circuit that would cover around 45 miles of moderately difficult hiking.  We would cover this in five days and four nights with the first and last days being easiest.  Once our bags were all packed they had to come in at around 35lbs a piece.  Lucky for Megan, as she had the food, her bag only got lighter the entire trip.

Day one (New Years Eve) started early catching a bus to the park and ferry to the trailhead.  The first hike was just a little over six miles and we started around 1 p.m., but being this far South, it doesn’t get dark until 10:30p.m.  The day was quite cloudy with a bit of rain here and there.  This first section of the hike took us out past a couple of lakes and to Glacier Grey.  Even with a cloudy sky the lakes had that beautiful turquoise coloring, but it was most astonishing seeing Grey glacier.  Megan and I have seen “glaciers” before, but those were mere ice cubes in comparison.  Glacier Grey covers over 100 square miles and is around 17 miles in length, but you only see a fraction of it when looking upon its leading edge.  Grey only makes up a fraction of the South Patagonian Icefield that covers over 4,700 square miles.  On the front of the glacier we could see spectacular lines of blue ice and a field of white going back as far as we could see.

Being that it is high season there were quite a few people at the campsite with many of them celebrating New Year’s based on times back home. This started pretty early with some Czechs popping Champaign early in the evening.  Megan and I decided staying up to 3-4 in the morning to celebrate by Missouri or Colorado time wasn’t going to happen, let alone one of our longest hikes was the next day. 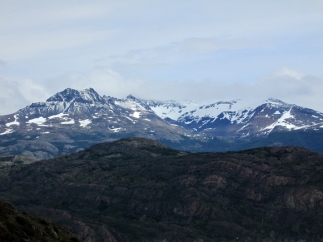 (Mountains off in the dinstance) 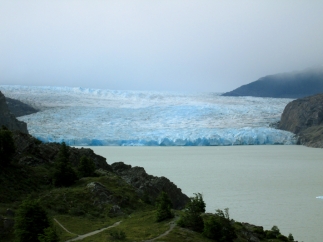 (Grey Glacier from a higher viewpoint) 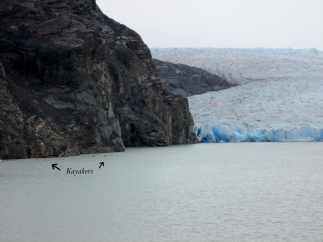 Day two started off quite nice with rather clear skies, flowers radiating different colors, and the white capped mountains showing off.  Everything seemed like it had an extraordinary luminescence to it.  Our hike took us back to the beginning of the trailhead and hooked off to make towards the center of the “W”. After hooking around, the wind drastically picked up nearly knocking Megan down a couple of times, and soon after queued the cold stinging rain.  I don’t think I have seen something encourage Megan so much to pick up the pace to the next camp site.  As we came into the site, the rain subsided and the clouds broke to show off the Cuerno Principal.  I nearly collapsed in amazement.  Being absolutely soaked and numb from the cold had no meaning as we stepped into some parallel world to experience euphoria. 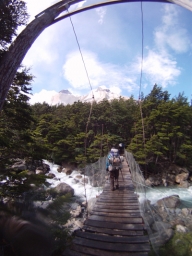 (Getting out to the open after getting soaked by rain)

Day three was a quick five hour out and back up the middle of the “W” and then cutting out toward the bottom right of the “W”.  Heading from camp we made our way through the Valle del Francés and up to Britanico viewpoint.  The bonus was that we got to leave our packs in camp since we would be returning, and since we could drink the water from the streams, all we carried with us was a cup.  That was pretty cool.  The day was quite clear and the views were phenomenal.  We were surrounded by a white capped mountain to one side that had continuous avalanches occurring as we made our way down the trail, the Cuernos del Paine on the other side with their stunning granite columns, and the turquoise Lake Nordenskjold behind us.  Megan and I both believe this valley was the best part of the park.  That evening we setup camp just below Cuerno Principal getting to watch the sun set behind it.  Of course that still wasn’t until 10:30ish. 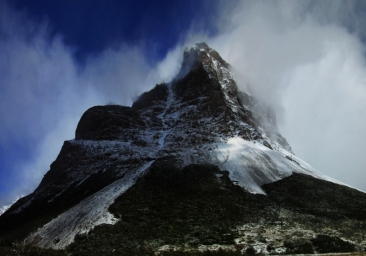 Day four was our hardest day with most of it being uphill and we put in around 12 miles.  This hike seemed to focus a little less on the mountains and more on the local fauna.  Of course we saw condors everywhere, which is always impressive, but what were really interesting were the black-faced ibises.  They looked like turkeys but with long, narrow beaks.  We were lucky enough to see one catch a mouse and quickly make snack of it.  We made good time to the campsite, so I decided to venture on up the mountain to get an evening view of the Torres spires.  Megan stayed back at camp saving her energy for the early morning departure for sunrise on the Torres.  Not even half way up the trail it started sleeting pretty good, making the granite pretty slippery.  Once I was to the top I couldn’t even tell where the spires should be.  Luckily the clouds and high vantage point still made for some good views.  By the time I made it back to camp I was nice and wet. 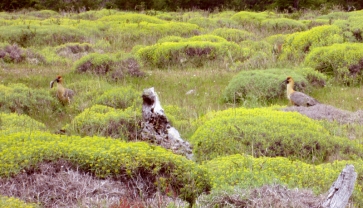 (Black-Faced Ibises, the left one making a snack of a mouse)

Day five, we hit the trail at four in the morning to catch the sunrise on the Torres.  It was funny to see all these headlamps bobbing around up the mountain trying to stay on the trail.  Going up the previous day really helped out making our way up in the dark.  Once we made it to the top we quickly found a rock to hide behind as it was super windy and cold.  Megan was even using a trash bag to help keep the brutal wind off her.  We were quite fortunate as the skies were mostly clear and we got to see the sun break across the spires.  The spires broke with amazing colors and the orange of the sun.  It was an amazing sight.  One thing that most pictures seem to overlook is the lake just below the spires.  I guess if we were there around noon it would be pretty amazing to see the sun shining on the spires and showing off the beautiful blue of the water.  The trip back was quick as it was nearly all downhill with a strong wind pushing us.

Making it back to Puerto Natales, we cleaned up and geared up for a border crossing and bus ride to El Calafate.  El Calafate is a nice little tourist town situated on the edge of Puerto Moreno National Park on the Argentina side of the border.  This makes it a popular hub for visiting glaciers and some beautiful lakes.  Megan and I didn’t take that as we already saw some amazing glaciers in Torres, but enjoyed some of the great views of Lake Argentino.   Heading further North we made it to Bariloche.  Bariloche is surrounded by a multitude of lakes with the Andes Mountains as a backdrop.  A very picturesque town and great place to kick back and relax.

We took a day to head a few kilometers from town and rent some mountain bikes to tour a bit of the countryside.  Starting off with a little rain we peddled up to a nice little café for some waffles, tea, and empanada.  Making our way through the curvy roads lined with large pine trees and lakes, we took in the scenery that is quite reminiscent of Colorado.  Towards the end of our tour we checked out the Llao Llao Hotel.  This is probably the most known Argentinian hotel.  I think it is really only famous for its location and not so much the hotel. 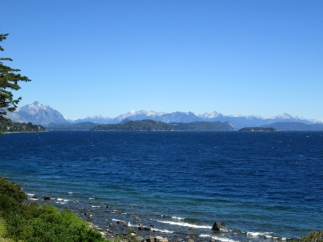 (Looking across the lake next to Bariloche)

There are tons of pictures and hope all of you are able to check them out as they give a small glimpse of the amazingness of Torres del Paine.

2 thoughts on “Magellan Shouldn’t Have Sailed Strait Through”