We made it to Sapa on a sleeper bus that was much better than the others, minus a really cold AC. Today has been amazing and quite a blast. We got here early so we nearly had a full day to explore. We wandered around the city center briefly before we made it to a park that allowed us to overlook the entire city. Quite amazing. 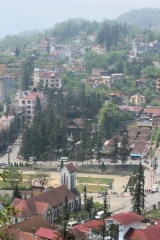 Later in the evening we headed to some street stalls to try some local cuisine. After wandering through briefly we settled on a grill place where we had some really good sticky rice, sprouts wrapped in some kind of meat, green beans, some round hush puppie like thing, and smaller pig intestine. We were quite skeptical, but went for it. We sat next to a couple of local gentlemen, Minh and Hoan. Hoan said hello and then they both immediately offered us shots of homemade rice wine. I openly accepted as not to insult them and Megan joined. They loved it. 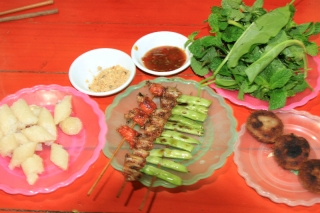 Hoan knew english and Minh knew french, albeit Minh did most off the talking and quite well he did. Ooops time for another shot! Interestingly, Minh fought for the North during the war but he held no grudge to us. At this time all I could taste was really hard alcohol. Guess it will disinfect that pig intestine! We finished up our meal and I looked over at them and Hoan was already holding another shot up to me. Bottle is empty and my ears are still on fire. Best part is that these two guys drive tourists around during the day! 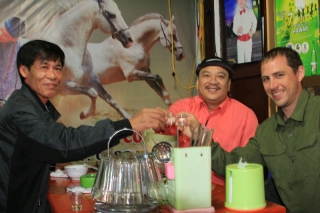 2 thoughts on “Whoaaa…that was strong!”