I think quite a bit has happened since our last post.  Our first sleeper bus ride went quite well.  We both slept ok but could have used some more sleep for sure.  It didn’t seem the driver was too crazy when hauling down the highway, as we did make it in one piece.

As we arrived around 7am in Nha Trang we were instantly greeted by the peddlers and people trying to show us to a hotel.  Megan and I decided to cut down an alley to lose a straggler that was annoying us, and in doing so we found a pretty nice hotel for $5 a night.  A little family run place that was quaint and nice.  They even did our laundry for $0.75 a kilo since there are not any self service laundry places.  After checking in we headed straight for the beach to take a dip and maybe a small nap.  It was quite beautiful with small islands off in the background and mountains behind us.  I think Megan was having a bit too much fun in the sea.  She would put her arms out like a plane thinking she could fly when any large waves would come in. 🙂

Once we soaked up enough beach time we headed out to venture around town and see what there was.  We stopped in at a few scuba places and by the end of the day we had signed up to take the advanced scuba class.   Woot!!!  Instead of doing PADI ($$$) we went with NDL which certified us for a 40M depth instead of 30M.  The course was supposed to be 2 days and 5 dives.  It didn’t happen like that.  We both needed a bit of a refresher since it has been a while since our last dive so we spent a couple of dives getting re-familiarized.  All in all we did it in 3 days and they let us do an extra dive for free.  I wish we had an underwater camera to show some of the awesome things we saw.  There was a real nice grouper, barracuda, lion fish, etc.. down there.  Our deepest dive included navigating through some small rock tunnels along one of the small islands.  The deepest we went was 26.6 meters (87 feet).  The pressure at that depth was pretty crazy.  It was a pretty awesome experience.  Some of the colors from different coral were amazing blues and purples, which is interesting because we had an ace of hearts with us and at that depth the red looked black.  If you have not scuba dived before you should really look into just a single dive to see what it is like! 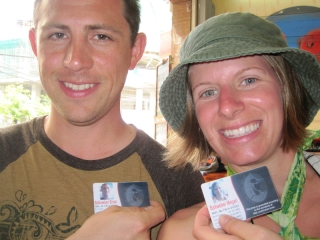 After our second day of scuba diving Megan and I thought it would be a great idea to run roughly a 5km run to see Po Nagar (wiki link).  Talk about making you tired after scuba diving, but it was totally worth it.  The temple was built in the mid 10th to 13th century.  This is some of the kind of architecture/design I have been wanting to see in person.  There had been a lot of restoration done, but hey it’s a super old site. Its crazy to see these hand made bricks centuries later still there and intact.

For you foodies you will love this.  Meg and I decided to scope out all the street vendor food and settled on a fried bread that had a small hard boiled bird egg in it.  That was pretty awesome.  There was a nice spicy dip to accommodate it.  Next was the cherry on top… a noodle dish with a gelatin like substance on top that looked and very well might have had gold fish inside of it.  We didn’t question it too much and just ate it real fast.  There wasn’t much taste so if you see it just pass on it.  I still sort of cringe thinking about it.  I hate gold fish.  Pigeons of the water world.  Finally we had to have a dessert which was a fried bread with sesame seeds on the outside and that had some kind of honey like substance inside.  That was scrumptious.  We went back the next night for many more of those. 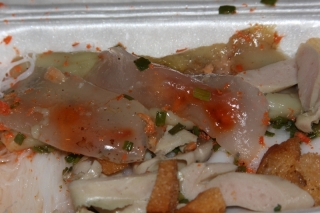 Through our scuba experience we met Brady and Shelly who were finishing up a 1.5 year long trip and are dive masters.  We enjoyed some good times on the boat and before heading out on our second bus we enjoyed an awesome Indian cuisine dinner with them.  They gave us some good advice on traveling through N. Vietnam, Laos, etc..  If you get a chance you can check out their blog [here].

After a great dinner we headed to our second sleeper bus experience…oh this one was great.  As we arrived at the pickup point there were a couple of Irish guys just ripping the lady behind the counter a new one because the bus supposedly left 30-45 minutes before scheduled.  Meg and I started to freak out a bit, but it seemed there was just a communication issue and the bus was just around the block.  Whew….  We got to sit in the very back of the bus that slept 5 people.  Holy hell that gave us a super bouncy ride back there.  The other 3 people were more than entertaining.  All of them hailing from England and complaining about being sore.  One of them pulled out an ointment that he purchased earlier called “Tiger Balm” or something like that.  It apparently heals sores, cramps, small cuts, many other little things and the best of all flatulence.   We were a bit stumped on how you applied it for that issue.  They said the cream smelled like Christmas.  Maybe I should send one your way, Allison!  Once we really hit the road I don’t think the driver knew he had breaks because he was hauling.  I couldn’t sleep if you even drugged me.  We made it in safely to Hoi An at 7 am and we are doing well.

I uploaded quite a few photos to the gallery page so be sure to check them out!